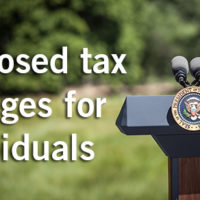 Now that Donald Trump has been elected President of the United States and Republicans have retained control of both chambers of Congress, an overhaul of the U.S. tax code next year is likely. President-elect Trump’s tax reform plan, released earlier this year, includes the following changes that would affect individuals:

The House Republicans’ plan is somewhat different. And because Republicans didn’t reach the 60 Senate members necessary to become filibuster-proof, they may need to compromise on some issues in order to get their legislation through the Senate. The bottom line is that exactly which proposals will make it into legislation and signed into law is uncertain, but major changes are just about a sure thing.

If it looks like you could be eligible for lower income tax rates next year, it may make sense to accelerate deductible expenses into 2016 (when they may be more valuable) and defer income to 2017 (when it might be subject to a lower tax rate). But if it looks like your rates could be higher next year, the opposite approach may be beneficial.

In either situation, there is some risk to these strategies, given the uncertainty as to exactly what tax law changes will be enacted. We can help you create the best year-end tax strategy based on how potential changes may affect your specific situation.