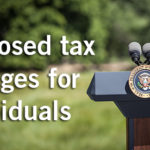 Will your investment income be subject to the new 3.8% NIIT?

Under the health care act, starting in 2013, taxpayers with modified adjusted gross income (MAGI) over $200,000 per year ($250,000 for joint filers and $125,000 for married filing separately) may owe a new Medicare contribution tax, also referred to as the “net investment income tax” (NIIT). The tax equals 3.8% of the lesser of… Read More »